THE Warrant under which the Derwent Lodge operates was granted to an unnamed Lodge No. 36 on the 15th August 1754 by the Grand Lodge of Free and Accepted Masons (known as the Ancients and later as the ‘Atholl Masons’, John third Duke of Atholl being the Grand Master).

This Lodge met at the Blue Bell, Horse Alley, Moorfields, London; it moved to the Red Cross in the Minories in 1775 and later in the same year to the Red Lion in Jewin Street, London. The Lodge lapsed in 1762.

EARLY in the year 1813 application was made by seven Brethren of Hastings for a new Lodge and the petition was recommended by Lodge No. 62, Irish Constitution, a Military Lodge attached to the Dublin Militia which was stationed in Hastings from 1812 to 1814.

It was the practice at that time to revive dormant Warrants to evade an Act of Parliament passed in 1799 which prohibited secret societies but exempted Freemasons Lodges then in existence.

In this way Warrant No. 36 was revived and a Fee of £5.5.0 was paid to Grand Lodge to re-issue this Warrant.

CONSTITUTION OF THE LODGE

In 1813 Hastings was a Garrison Town ready to repel the threat of a Napoleonic invasion. The constitution of the Lodge was carried out under the Banner of a Military Lodge, No. 332 attached to the 2nd Battalion 58th Regiment, Jersey who had been transferred from Portugal to Hastings in 1813.

A Grand Lodge was held at the Cutter Inn, Hastings, on the 5th May 1813, presided over by the Deputy Grand Master, Bro. Thomas Stack, who reconstituted Lodge No. 36 and installed Bro. Thomas Sargent as Master, who in turn invested his Officers.

Interestingly, the landlord of the Cutter Inn was Bro. John Bell, who had formerly been valet or ‘Tiger’ to Lord Nelson.

Bro. Thomas Sargent, the first Worshipful Master, was a Mariner, and only held office for two months, as on the 12th July 1813 both he and the Tyler 'declared off’ as they were going to be absent for some time (apparently going to sea) and the Senior Warden, Bro. Henry Rogers was installed as Master.

On the 27th December 1813, Bro. Powell, Secretary, reported that from extracts taken from the ship’s Log Book to which the previous Master, Bro. Sargent belonged, it would appear that he was charged with a most abominable crime.

The Lodge decided to notify Bro. Sargent that unless he could clear himself of the charges he would be excluded from the Benefits of Masonry and that Grand Lodge would be notified of the facts of the case. Bro. Sargent did not reply and he was excluded. Grand Lodge was notified and he was paid back money he had advanced in connection with the forming of the Lodge. 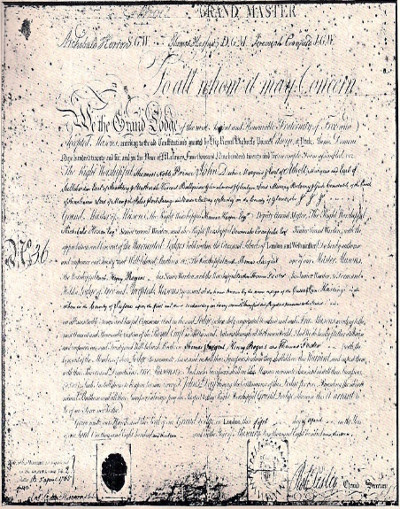